The monumental Provincial Government Building, where the Provincial Council has been meeting since 1602, can be found at the foot of the Martinikerk in Groningen. This is quite unique in the Netherlands; no other province has held meetings in the same place for this amount of time. This impressive building complex has been renovated several times throughout its history. For example, a stylish glass canopy was added to the courtyard in 2006. And this time it was the car park’s turn, which is located below the Provincial Government Building. The floor has been renovated and the old rolling gates have been replaced by tasteful, modern Speedgates, giving it a fresh, light and friendly look.

HTC parking & security installed a fast and reliable Xentry 2TP Speedgate at both the entrance and exit and has given the perforated cladding a sleek finish with a light grey metallic coating. Pedestrians and cyclists were also taken into consideration. They can leave the car park via a separate wicket door, which we have naturally also finished off in the same contemporary style as the Speedgates. This separates the fast traffic from the slow traffic, which contributes to a smoother flow.

Creating a smooth flow was one of the Provincial Government Building’s wishes. Especially during peak times. During the week, when employees enter and leave their place of work in the Provincial Government Building and during weekends and evenings, when the car park is used by visitors to the city centre. The Xentry 2TP Speedgates therefore offered a perfect alternative to roller gates. They are, after all, just as fast as a barrier and, at the same time, also offer optimal security and a stylish appearance. As a result, driving in and out of the car park has become much more pleasant and even easier and quicker. 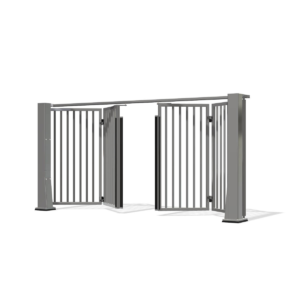 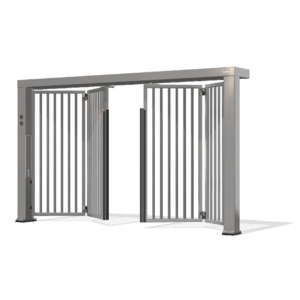